Story submitted by Richard Williams who led a mission team from Matthews United Methodist Church in Charlotte, NC to work with Oasis Ministry in Belize.

“I wanted to tell you a story about the soccer balls from Peace Passers. We delivered 16 soccer balls to 4 schools in Belize. One of the schools was in Spanish Lookout, near the capital city of Belmopan.

There were about 150 children (K-6th grade) at this particular school.  After a 10 minute positive message talk with the kids we brought out the soccer balls.  This was a very special moment to see their eyes light up! 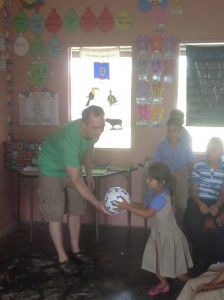 We then took 7 soccer balls out on the field and played with the children for about 20-30 minutes. As I was leaving the teacher asked me if we were going to leave the soccer balls. She explained to me that the younger kids don’t get to play soccer at recess because they only have two balls for the entire school. When the teacher learned we would be leaving the soccer balls for the younger kids school she was thrilled to know that her kids would have the opportunity to play!”